Vector is a transforming battle robot legend of Brawlhalla, featuring the Rocket Lance and Bow as his weapons. This robot-man-jet hybrid brings the power of the cyberfuture and an entire fighter jet to the field, using his extremely advanced parts and transforming limbs to field bows, lances, high-power drills, swinging blades, laser cannons, and carpet bombs during the fight, which should prove more than a match for any Legend, and a glorious spectacle to all in the audience watching. 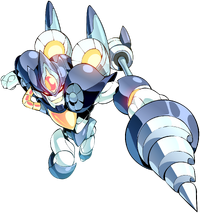 "Commander Vector, it's much worse than we thought. KABAL sent The Mechassassin back a thousand years to 1987. We believe its mission is to eliminate an ancient leader named 'Sen-tin-el' and rewrite human history."

"Copy that. Prepare your strike team to seize the Time Portal long enough to get me through. Once I'm in the past, you will destroy the Portal forever. Don't argue. Get me my starlance, my keytar, and some source material on what humans looked like back in 1987."

In the year 3006, cybermarine Arcturious Vector pursued his nemesis, the Mechassassin Blackstormfar into the distant past of New Earth. His mission did not go as planed.

First, when Vector arrived in 1987 he discovered his time had a very distorted image of what humans looked like in the ancient past. Humans were not steel-winged, they did not subsist on a primitive naptha-kerosene blend, and they did not have epic guitar chords playing in the background at all times. If he ever returned to his own time, he would correct Engram-Killivac's Encyclopedia of World History. But in the meantime, it was too late to change, and while his jet-hybrid form was not the disguise he'd hoped, it was comfortable, useful and incredibly cool.

Second, when he found Sentinel, he discovered not a defenseless civilian, but a Superhero locked in deadly combat with the evil KABAL, and an Earth assaulted by villains and threats of all sorts. Vector pitched in with enthusiasm. He led the counterattack against an alien invasion force, he defeated a squadron of super-intelligent jets, and he fought Blackstorm in a battle over Los Angeles so epic that the soundtrack could be heard as far away as New Mexico.

In Valhalla Vector fights, builds jet engines with Scarlet, teaches yoga, and communicates mostly in Top Gun quotes. But he has recently discovered that Scarlet may know more about time travel than she admits, and his circuits are beginning to whir.