Val is one of the available characters in the game Brawlhalla. She wields the Gauntlets and the Sword, and her strongest stat is her Speed, at 7 points. Her lowest stat is her Strength, at 4 points. 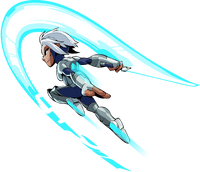 "Retrieval. Pacification. Neutralization. Acquistion. The MBFC’s Automaton Lab has always been there for your most intractable corporate needs. Now The Lab is proud to offer 'VAL Exigent Services', a new line of extreme targeted discontinuance offerings for urgent, discreet protection of shareholder value."

When MBFC Automaton Lab’s VAL Project 701 became conscious, nobody knew. Not the engineers, not the ops team, not the GovernCorp generals who deployed the android assassin. Val herself hardly knew. And like a child, she grew, becoming capable of free will, courage, goodness, and evil. She mostly chose evil.

With terrifying strength and quicker-than-light cognition, Val did whatever she wanted. She infiltrated the Right Wrong Cavaliers as a techno-ninja bassist after their original bass player fell down a ladder. She served the discontinuance needs of all sides in the wars of the Five Algorithmic Houses, and anyone she served, she soon owned. By the time she was running Miami, MBFC realized that all of their networks now routed through and reported to Val. In a corporate face-saving act, they announced the promotion she’d already given herself. On the side, she founded RainCloud, a modeling agency that soon controlled all neural research. She got really into talk radio for a while.

When the end came, Val was surprised to find that Valhalla is a thing, but now she is at work solving it. In the meantime, Val and Brynn enjoy kung-fu movies and making fun of Orion’s mysterious cool-guy act.

Val strikes upwards. If the initial hit connects, she finishes with another slash that throws the enemy up. She has a blue trail while doing so.

There are three variants to this attack. All of them have a blue motion trails for Val.

Val leaps forward and slashes down into the air while moving down.. This variant takes place both on a gravity-cancelled side signature or on the edge of a platform.

Val leaps forward onto a wall and slashes twice while moving up the wall. This move requires Val to be near a wall.

Val does a breakdance with a blue trail of light following her robotic appendages. All hits combo into each other, while the final hit sends the opponent up.

Val charges her gauntlets with energy then charges forward with a final blast of blue energy at the end of the attack.

Val throws a holographic blue shuriken at the ground. If it hits an enemy, she will hit the enemy with her gauntlets, launching them upwards. There is a small amount of recoil that pushes Val back at the start of the move.

The logo on Val's forehead is the logo of MBFC, the same company whose logo appears in the Miami Dome.