Teros is one of the available characters in the game Brawlhalla.

Wielding a Hammer and Axe combo, Teros' life travelling from battle to battle has instilled a slow but undeniable brutality into him - this brutality makes him a ferocious fighter, and his animalistic recklessness makes him dangerously unpredictable, which he uses to great effect in the eternal tournament. 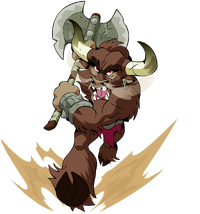 "Searching the dragon 's chamber, we found yet another passage leading down. By the dwarf's reckoning, we were now twenty levels below the ruined keep. After a long descent, we emerged into the center of a vast stone labyrinth."

– Flynkin Furfoot, only survivor of Heroes for Hire's expedition to Peril Mountain

"I hate 'adventurers.' Always so sure, so sure. Like they have a magic spell that can tell good from evil, right from wrong."

The orphan boy-calf Teros relied on his terrible visage and instinct for sudden violence to survive on the streets of Dragonport. He got by as a stone carrier and debt collector until, in the gladiator pits, he found his true calling in reckless combat.

He thrived in the ring, crushing cleverer foes with implacable fury and animal wile. In the end, he could only be pitted against the rare ogre or giant, and he moved on to a life of wandering.

For a time, he carved out a place in Fangwild Forest, shouldering aside a wyvern and a hobgoblin clan. Later, he fell in with the Iron Legion, turning the tide of the Battle of Orc Pass for the Zombie Lord. His tenure as wizard's henchman ended typically - with the evil mage shrieking to him, "Finish Them!" while fleeing through a magic portal. He lived for a while deep in Peril Mountain, where he found a strange comfort in the maze of abandoned tunnels.

In Valhalla, Teros is indifferent to the rules or intent of the Tournament, but takes savage joy in all battle. His nightly visit to the mead hall is heralded by throngs of fleeing Valhallans.