Scarlet is one of the available characters in the game Brawlhalla. Scarlet is a Victorian steampunk-styled legend, featuring the Hammer and Rocket Lance as her weapons.

Scarlet's cultured, high-class background is reflected in her equally sophisticated Victorian-era clothing, coloured brightly in white, maroon, and blue. Her eyes show her curiosity of and desire to dismantle everything around her, and her weapons are both enhanced with steam power, making their impacts far harder, her offensive style far more potent, and her attacks far harder to forget. 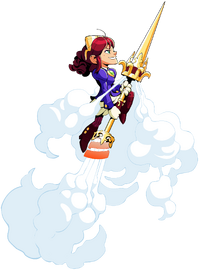 "Ignore the pterodactyls! Get me on that Zeppelin!"

– Scarlet to her air skiff pilot, Second Battle of the Andes

Scarlet Dashwood was the youngest person ever elected to the Royal Society, and the only female boxing champion of England. On a expedition to the remote Andes searching for the source of the mysterious aether-flux, she discovered a Lost World of dinosaurs, but was betrayed by her partner, the most beloved scientist of the age, Baron Von Evilstein. The Baron stole her inventions, framed Scarlet for his supposed murder, and vanished.

Ten years later, the Baron emerged from the Lost World at the head of a vast armada of airships and dinosaur-riding ape warriors. One after another, the armies of the world fell before the Baron's high-tech aether weapons, until Scarlet and her Royal Airship Navy were all that stood between the Baron and world domination. In the skies over the English Channel, Scarlet led the counterattack, finally defeating the Baron in a vast air battle that twice circumnavigated the globe.

Since arriving in Valhalla, Scarlet has been obsessed with the wondrous technology of the gods, and is constantly devising new weapons and challenges to add to the tournament.