Reno is one of the available characters in the game Brawlhalla. He is an alien bug cowboy that wields Blasters and an Orb named Orbot. Reno has four arms, his two extra arms crossed against his chest when he's not using Signature attacks. 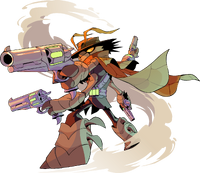 "He hunts me all day long. Night is worse because while he’s hunting me, I’m also dreaming he’s hunting me. I hope he catches me in the daytime. I’m even more afraid of the dream version."

– Mad Mandibles, at his support group for outlaws hunted by Reno

"These are four six-shooters. That’s uh, four plus two, carry the one… that’s twenty-six bug-bullets. Are you feeling lucky?"

With four pearl-handled lazblasters and his robot companion Orbot, Reno travelled the Rexxar star system hunting down the most vicious outlaws in the tri-stars. Four arms, compound eyes, and utter fearlessness make Chitinoids natural gunslingers, but Reno added a dose of genius that made him the greatest tracker this side of the Pecosid asteroid belt.

He brought in the Gygan millipede in 500 tiny handcuffs. He collared the ninety-foot Death Worm, wanted for not returning library books. He stayed busy, often scheduling shootouts for high noon, 12:15, 12:30, and 12:45, then after lunch starting at 2:00.

But even for the best space bug cowboys, bounty hunting isn't much of a living, and it always ends on the wrong end of a laser. In Valhalla, Reno pretty much keeps to himself, though Orbot has become quite social, hanging out with Cassidy and even fighting for Thor when his Thunder Ball was in the shop. Reno fights for prize money and dreams of maybe winning enough to stake himself a little ranch on the Ifing river.