Champion of the Glade of Dreams

"Long ago the Primordial Forest, deep and mysterious, witnessed the birth of a man...a vegetable...no, no, no: a thingamajig. Conjured from the magnificent moonbeams of the second summer solstice, woven together by us, the nymphs, destined to preserve the equilibrium of the sacred universe, the one we call: Rayman!" -Betilla the Fairy, Origins

The Glade of Dreams is once again under threat from the nefarious Mr. Dark, and once again, Polokus, the Bubble Dreamer, has called upon Rayman to save the day. From Polokus, Rayman learned that the only way to defeat Mr. Dark was to find the lost Horn of Lums.

Setting forth on his quest, Rayman ventured deep, deep into the forest. One day, after long travel and many adventures, Rayman emerged into a wide clearing. High on a hill he saw a huge golden hall, and heard the roar of a vast crowd. Entering, Rayman was met by the sight of the Grand Tournament of Valhalla in full swing. Among the throng of cheering spectators, Rayman saw the god Odin wearing a "Sentinel #1" baseball cap and a Sir Roland jersey (it was 2v2s-day). Next to Odin sat the Tournament's glorious pile of prizes. Sitting on top of the pile was the Horn of Lums.

Without hesitation, Rayman entered the tournament. That he would be battling the greatest warriors of every time and place bothered him not at all, and he quickly showed himself to be one of the best. But even for Rayman, victory will not come easy.

Rayman is fighting hard to win the Horn and complete his quest, but he also loves the wild ruckus of Valhalla, and feels right at home among the bizarre cast of legendary warriors. He is especially good friends with Kaya and has a truly amazing handshake with Kor that only they can do.

"Have you seen the new guy? Things are really getting weird around here"
"You're an actual cat."
"That's fair." - Asuri and Jhala

Rayman's exaggerated, cartoonish appearance reflects his roots as a crossover character from a franchise best known for platforming and hop-and-bop action: his purple and red hoodie and yellow/white sneakers are brightly colored, his canvas gloves are classically clean and white, and his hair consists of two goofy sand-colored upsweeps of hair.

Most notably of all of course are his large eyes, wide, joyful smile, extremely large smooth snout and a complete lack of actual connecting limbs between his torso and his hands and feet.

The most extreme details of his appearance, such as the helicoptering hair, and the limblessness are, of course, utterly canonical, and explained in Rayman's main games.

Rayman's uniqueness comes with his versatility - his signatures all sport either a diverse amount of range or mobility via responsive charge mechanics, with the Axe NSig being the only signature move with no responsive charge. Use this to your advantage - Rayman's moving, stretching sigs can be used both as a quick short-range hit and combo finisher, or a means to "reach out and touch" an opponent who's being cautious.

Also, use the variety itself to your advantage - most players anticipate a fixed range for a signature move, meaning mixing it up can be an effective way to throw your opponent off in addition to extending your range of options in a fight.

The downside is that none of Rayman's sigs are immediate reliable followups to his light attack kit - they largely stand on their own in moments of battle, best used as singular strikes or responses to situations than mixed in with strings, which can make Rayman a somewhat static, stodgy character for those not intimately familiar with the possibilities of his moveset.

In terms of power, the Axe Nsig is Rayman's most singly powerful attack if you can hit it from the base of the jump. 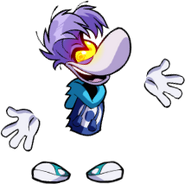 140
He stops at nothing to soil Rayman's reputation. 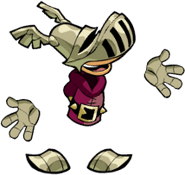 140
A mysterious hero who never takes his helmet off. 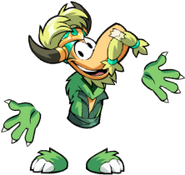 Official art by theOddling
Add a photo to this gallery
Retrieved from "https://brawlhalla.fandom.com/wiki/Rayman?oldid=3255"
Community content is available under CC-BY-SA unless otherwise noted.