Ragnir is one of the available characters in the game Brawlhalla. 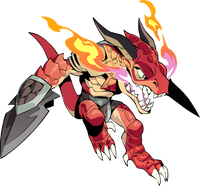 "A dragon who takes human form to compete? How is that fair?"
"How is that human form?"
"I know, right? It still breathes fire. Things are really slipping around here."

"The Fangwild is collapsing. Enemies strike from all directions, even this one. There’s more going on in Asgard than you know. I just fought a feathered serpent in the hall."

Ragnir Malakkar Rex is an apex predator, a dragon ninety feet long in his natural form. He hunted the Fangwild Forest and its neighboring lands, and everything he met was prey or plunder.

The first years after Ember’s disappearance from the Fangwild were good for the dragons. Without its heart, the eldritch forest descended into chaos, opening paths to new lands to ravage. Ragnir's favorite entrance to a new land was to emerge from an erupting volcano silhouetted against gouts of lava. In fire and battle, Ragnir's hoard grew. He collected mountain hearts from unlucky dwarf kings. He wrested so much gold from the Madman of Barbados that he is the pirate’s Moby Dick. His Fangwild lair grew so vast it was mistaken for a city of gold.

But now under mysterious assault, the forest is knotting itself into pure madness, and disaster looms. Ragnir knows the Fangwild's only hope is to restore its Heart, and he journeyed to Asgard to bring Ember back. To that end he takes humanoid form and fights in the Tournament, reveling in the battle. At night he reverts to dragon form, soaring over Asgard to find the path back to the Fangwild or just eat Odin's sheep.

Ragnir featured in the release art of a Maypul skin in Rivals of Aether.
Retrieved from "https://brawlhalla.fandom.com/wiki/Ragnir?oldid=19662"
Categories: