Mordex is one of the available characters in the game Brawlhalla. 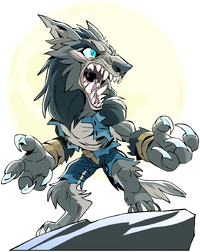 "And to think my Order's own quartermaster, Octavius Mordex, was a stinking werewolf all along."

– Diana telling Ada the story of her betrayal.

"Yeah, well, she should have suspected something when she found me sleeping under the porch."

Mordex had wormed his way into the noble Order not to do good, but to get closer to the monsters whose powers he so desired. He overthrew the Cult of The Ice Witch but reported their Tome of Rituals "lost in the fire." He destroyed the Wraith of Darkmoor but secretly took the fiend's great scythe Cull for himself. And now he saw his chance to gain power of a whole new sort.