Mirage is one of the available characters in the game Brawlhalla.

She's the first Legend featuring the Scythe as her weapon (alongside Spear). She can be unlocked for 3900 gold on Store. She has a long black hair and uses what resembles a desert/Pharaoh typical cloth (covering her head and body) with some cyan jewels and also a minor red thunder tattoo under her purples eyes. She uses her magic powers to also control sand making her a strong and fast opponent which is shown on the battlefield of Valhalla's eternal tournament. 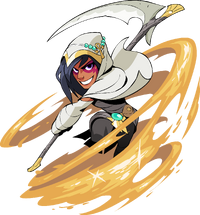 "Scholars have long puzzled over why the ancient Egyptian hieroglyph for "badass" is a combination of magic, scythe, and woman."

"Of all the afterlifes, you had to walk into this one. What are you calling yourself these days?"

In 1923, occultist, martial artist and spy Fatima Sabiq, codenamed agent Mirage, pursued the nefarious Professor Price back in time through a gate in the pyramid of Pharaoh Amenemhet the Great.

She assumed, as a magic-wielding time-traveler, she would be the strangest thing in Ancient Egypt. She was not even close. The Nile River Valley of 2000 BC was a nexus of magic, aliens, technology, and living myth beyond the wildest speculations of her time.

She discovered Darkah, the city of assassins under the desert dunes, and was inducted into their mystic society. She learned from a forty-foot Sphinx the martial discipline he called sand-weaving. She hitched a ride on a passing Zhaktari star cruiser, and stole the Scythe of Horus from a one-eyed alien. She slew the mad Pharaoh Eh'zath who called plagues of snakes from the sky. She learned the language of the Merfolk to better parley with the Atlantean ambassador. On 'Bax' her flying camel, she led the Panther People to victory over the slave caravans of the ram-headed god Khnum.

In Valhalla, she is at home amongst the strange collection of characters who battle in the highest ranks of the Great Tournament. She has been surprised to find old friends, enemies, and even a target in the halls of glory.