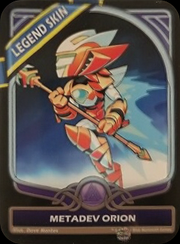 Metadev skins are rare items that can not be obtained in-game or through any DLC. These skins can only be distributed by a Brawlhalla developer.

Developers will occasionally distribute codes during the "Bigaway" of a Dev Stream. There is always a small chance of winning the giveaway to obtain a code, so owning one is an achievement in itself.

Another method is to receive the code directly from a Dev after meeting one in person, hence the name "Met A Dev." Each unique code is written on a collectors' card for the recipient to keep, however, redistribution is not prohibited. 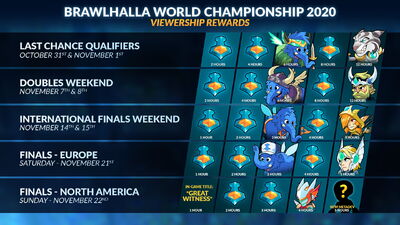 Dates to earn every Metadev Skin during BCX season.

During the month of November 2020, Brawlhalla made all 6 Metadev skins, including the newest Metadev skin for Fait, available through Brawlhalla Viewership Rewards. This was specifically for Brawlhalla's 5-year anniversary as well as BCX. It was emphasized that, after November, these skins will never be available in this manner again. After BCX, players who had previously owned Metadev skins before the distribution received exclusive Titles for each Metadev they owned.

After a Metadev is in circulation for about a year, it gets discontinued, and a new Legend gets a Metadev skin. New codes for old Metadevs will not be generated, but unredeemed codes will still work. Discontinued Metadevs will remain unavailable indefinitely.