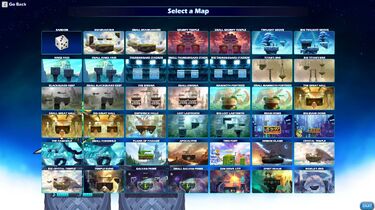 Maps (previously called Realms) refer to the myriad stages and locations where the battles of Brawlhalla are fought. These can vary from prehistoric temples of bone and stone to floating platforms above a steam-driven Victorian city. Some correspond to certain characters and themes, others do not.

In Custom Online lobbies, players can vote for what map they want to play. Maps are selected randomly in Casual Matchmaking and Ranked, but the player has the option to ban a single map from play.

The following maps can be played on in regular gamemodes:

The following maps can only be played on certain gamemodes:

Test Maps are special maps that are generally added so the devs can receive feedback on the map's design. These maps can only be accessed through custom games with the test maps setting enabled, or through experimental queues (if any are available). Unlike regular maps, test maps do not have any finalized theme, instead reusing art assets from other maps.

If a test map is well received, it will graduate into a full map, where it will receive a new name and theme. Otherwise, test maps will either stay exclusively as test maps or become entirely unavailable after some time.

Currently, there is only one available test map: