Mako is one of the available characters in the game Brawlhalla. She was added in patch 4.07 and is the second Legend to wield Greatsword. 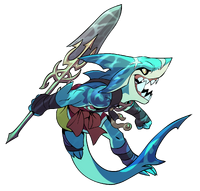 "Of all the children of Poseidon and The Sea, the largest is Kraken, the strongest is Maelstrom, but the most feared is Mako"

"Your parents were a viking and a bear? That's nothing, try a lunatic and the sea ."

– Mako to Bödvar after too much rum

Atlantis wasn't always at the bottom of the sea. That was Mako's fault. In the Great War of Atlantas at the end of the age of legend, the gods battled for the control of the fabled city. Zeus struck down Poseidon with a lightning bolt. In range, Poseidon's young daughter Mako let an attack on Atlantis so terrible that the sorcerers of the city chose to sink it beneath the waves to escape her wrath, robbing Zeus of his prize. Then for good measure she bit off his foot.

Poseidon fell to Earth, his memory gone, doomed to wander the seas as a madman. But Mako became the queen of the now undersea city - much to the relief of the Atlanteans. Her terrifying present won many battles on fear alone. The Phoenician navy fled when it saw her teeth. She scares sea monster Cetus so badly it fled to Scotland and is still hiding. She was less interested in governing than fighting, and invented democracy because she was tired of subjects asking her questions.

In Valhalla, Mako is a ferocious competitor and a great 2v2 partner, though be careful if she calls you 'chum' - it's not a term of endearment.