Magyar is one of the available characters in the game Brawlhalla. Magyar was added in patch 5.02 being the third Greatsword Legend, the second genderless Legend, and the first Legend to have a defence stat of 9. 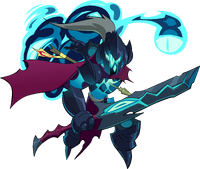 "Dearest Sarah,
Since arriving at the castle, I cannot shake this feeling of constant dread. In the ruins of the main hall a great suit of armor stands untouched by time. When I see it, I feel the awful weight of the castle's dark history, and a long to complete my research and return to you. Hanson and Williams have vanished. The dog will not stop barking."

"A hundred lost souls in an empty suit of armor? It's getting weirder around here."
"Your hands don't attach to your body."
"True."

– Rayman and Asuri at lunch

Batavian ghost stories tell of the Strazci, 100 elite knights slain in a battle with dragons. Using the power of an unholy relic, the desperate king raised his knights from death, reanimating each suit of dragon-burned armor with a spectre of the undead. With this unholy legion, Batavia terrorized its enemies. To the horror of their foes, the power of the necromancy was such that whenever the Strazci fell, its spirit escaped to join and strengthen a knight that remained. Thus the might of the Strazci went undiminished.

Over centuries, the Strazci won countless battles from the masters, but constant war whistles away the undead company's numbers. The power of the remaining Strazci concentrated and grew. Finally, at the great Siege of Lins, the final knight fell but one. Only Magyar, the last of the Strazci, survived the losing battle.

Magyar remained to haunt the ruined halls of the abandoned castle until the 21st century finally brought doom. Grown complacent from dispatching meddling intruders armed only with snacks, Magyar was not ready when real monster hunters came armed with ethervision goggles, guns, and The Spear of Saint Cuthred.

In Valhalla, the spirits inside Magyar love battle, steer clear of Nix, and fill out the baritone section of the Asgardian Halloween Spooktacular Choir.