Lin Fei is one of the available characters in the game Brawlhalla.

With Lin Fei’s high dexterity and speed, she is a high defense orientated character that evades the enemy and bombardes them with constant martial slashes from katars or constant strikes of the cannon. One attack should leave them open to a death, as it chains to mutiple combos that is hard to escape. As a martial artist, you must let the enemy attack first, to find that opening and capitalize. 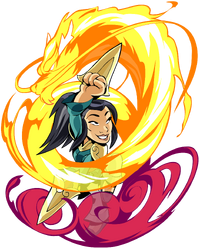 "Lin Fei's encyclopedic 'History of the Martial Arts' may be the greatest literature to emerge from Song Dynasty China. The story that Lin Fei mastered every technique she described is, of course, impossible"

"My own fighting style I named 'Way of the Iron Dragon.' It failed to gain much popularity with my students – probably because the pre-requisites are a full-size cannon, an ancestral dragon-spirit, and the strength of ten men."

Wu Shang tells of a time his Imperial soldiers raided a village for gunpowder, and a young girl challenged them. This girl fought with such perfect skill for her home and family that it caused him to question everything about his own life.

That girl grew up with a passion for martial arts. She traveled to distant and dangerous lands in search of ancient forms. It was deep in the long lost Library of the Seventh Empire that she freed her family’s ancestral guardian, the dragon Xiao.

She became a renowned teacher and scholar, often dealing out her lessons the hard way. She thrashed the marauding mountain giants, then taught them how to use their size to proper advantage. When the Emperor’s very first ninjas challenged her to open combat, she clobbered them, then she advised them that wearing black and tip-toeing might be more their thing.

in Valhalla, Lin Fei has not yet told Wu Shang that she was the girl from his fateful day. She has, however, told him how to improve his Fist of Fire technique with a few breathing tweaks. Top legends seek out Lin Fei to refine their own styles or learn new moves. She taught Cassidy the Tornado, Azoth his Shrieking Skulls, and Roland the Flaming Horse. Volkov dedicated his first Asgardian Cup to her. The closest Thatch has ever come to gratitude was when Lin Fei taught him to tap his deepest inner lunatic to summon the Spirit Shark.