Jhala is one of the available characters in the game Brawlhalla.

She is a powerful but low defence legend who uses the Axe and Sword as her weapons. She can be unlocked for 5400 gold. Jhala, coming from a powerful barbarian tribe on Earth, wears rough, studded-leather armour trimmed by white fur, and burnt red tattoos across her dark skin. Growing up in one of the world's most deadly environments, Jhala spent her early life learning that power means survival and then taught that lesson to monsters, vampires and evildoers alike. Her strength and rage are as much a deadly force of nature as her birthplace, and she continues to show this in the field of battle in the eternal tournament, defeating foe after foe. 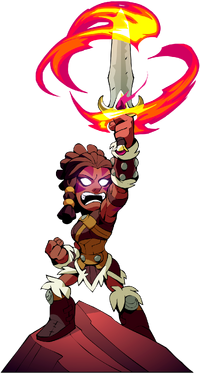 "Ogedai's epic 'One Thousand Tales of Jhala Unbroken.' is the greatest literature to emerge from the Era of Trouble. Whether any real barbarian queen existed as the root these outlandish tales, we may never know."

– Aristophan's 'History of the Troubled Age'

"Don't write that down. No one would believe it."

– Jhala, to her sidekick Ogedai after slaying the Winter Ogre with a 'Beware of Ogre' sign

Life was tough for the hardy villagers of the Ikrusk. They survived freezing winters in the shadow of Mt Tragedy by huddling around pools of the hellfire that rained eternally from its peak. A good summer was when the scorpion swarms thinned out the vampires. By day they would tend livestock, and by night they would drive back the haunted suits of armor that fell from the sky. Hardship made them tough, and most potential enemies were awed enough to leave them alone.

Not so The Lord of Scales. Riding the Dragon of Conflagration, he burned the village to the ground and then some. Young Jhala survived only because she was safely suspended in midair, climbing the dragon's bulk with axe and knife. In the sky over her burning town, Jhala cast down the Lord of Scales and seized control of the Dragon. However, it was too late for her home. Astride the great wyrm, Jhala set off.

Thus began the greatest adventure epic of the age. Jhala stole the Scepter of Invincibility from the (formerly) Invincible King. She bested the Orc Warlord in single combat, earning the (purely honorary) title "Friend". She won the city of Dragonport in a drinking contest with the pirate queen. Apollo himself gave Jhala the title "Exalted Lion" after she led the armies of all Thera to victory against Ehzot, the Zombie Lord.

Jhala takes the glamor of Valhalla in stride, thinking at any moment she could be back to roast scorpion and improbably violent precipitation. But in the meantime this is fun too.