Jaeyun is one of the available characters in the game Brawlhalla. Jaeyun is the 50th legend that was added, as well as the first legend to wield Greatsword. Jaeyun's design comes from Korean origins. 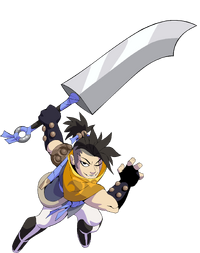 "The games warrior sauntered into the square. He declared that for the fight to be fair, he would use only a wooden stick. Hearing this, the Mountain Giant lost his nerve and fled."

– Tales of The Sellsword

"I remember that one. I'd lost my sword and armor playing tujeon, but I took the job because I needed money. Lucky break finding that stick."

– Jaeyun, thumbing through a copy

The legendary mercenary Jaeyun travelled the seas and the Old Kingdom on the back of his dragon turtle companion Imugi. As a soldier of fortune he won treasure beyond counting - at least he never counted it himself before he gambled it away.

He earned three wishes in one day rescuing a unicorn-lion's soul from The Goblin King, but lost four wishes that night playing poker with a fox spirit and had to grant a wish himself. He earned ten thousand rubies and a huge magic sword on the job protecting the king from the shadow ninja Jiro, and managed to hang on to the sword. He earned 2 copper/hour delivering barbecue. Work is work.

His most famous task was his epic five year quest to help Imugi become a true dragon. His least favorite job was the time he lost an eye getting a cat out of a tree.

Jaeyun loves Valhalla, though regrets teaching Fait to play tujeon. In the area, he loves side bets and bets heavily of himself. The year he won the Grand Tournament, he put everything on "In the final match, Jaeyun will be the first to greet his opponent" and lost a fortune when Kaya was quick and in a good mood that day.