“Scholars propose the Fangwild Forest is a spacetime anomaly much like a black hole. It borders many realities, and in theory travelers might pass through it into other worlds. But they would inevitably be torn to shreds along the way.” -Smith’s Miscellany Cryptobotanica

Ember is a legend of Brawlhalla featuring the Bow and Katars as her weapons. She was introduced to the game on November 11, 2015.

No mortal has seen the center of the Fangwild Forest. The magic is too dense, the peril is too deep. Not the elves who live on the edges of the Fangwild. Not the adventurers and fools who brave the forest in search of paths to other universes. Not the ghouls and beasts drawn in by the call of magic. No mortal but Ember.

For thousands of years, Ember hunted the ever-changing paths of the Fangwild. With the wolf Ash and her raven Yarra, she guarded the Fangwild from itself, and protected the bordering worlds from the eldritch wood. She fought the Primordials. She befriended a lonely Minotaur. She rescued a furious viking lost deep in the Fangwild’s heart. She rode a wild dragon through the maelstrom at the heart of the forest. In ancient days before Valhalla, Fangwild’s borders touched even Asgard, and Ember walked with the first warriors among the mighty trees that would form its rafters.

Now, amidst the glory of her afterlife in Valhalla, Ember’s mind is fixed on the Fangwild, and the Fangwild mourns its daughter. With Ember gone into Valhalla, the Fangwild has slipped into madness. Twisted and impassable, its wilds threaten to spill out across the many realms it touches. Ember knows there are paths both to and from Valhalla. She fights in the tournament, hoping that in victory she can find a way back and set things right in her forest home.

Ember, born and raised in the magical Fangwild forest, has a forest elf theme in appearance. She wears a patterned, leaf green cloth cape and hood that rests on her shoulders and head, leaving slits for her elven ears. Fitting with the colors of the forest is her brown leather body armor, including a chest piece, boots and fingerless gloves that extend down the forearm, typical of an archer's attire. While predominantly brown and green in color, allowing her to blend with the woods of her homeland - a vibrant flash of color can be seen in Ember's fiery orange hair, which shows from under her hood and is held by two golden bands either side of her face. 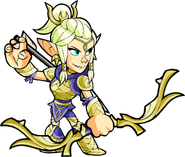 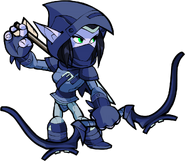 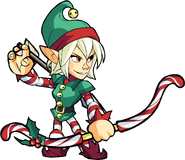 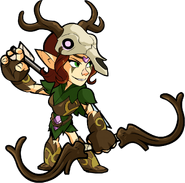 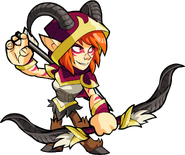 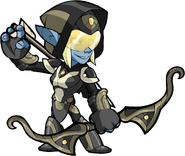 Dragon Heart Ember
Add a photo to this gallery

Retrieved from "https://brawlhalla.fandom.com/wiki/Ember?oldid=2669"
Community content is available under CC-BY-SA unless otherwise noted.