Cross is one of the characters available in the game Brawlhalla.

Cross is a fairly slow, but powerful, demonic mobster Legend featuring the Blasters and Gauntlets as his weapons. He can be unlocked for 5400 gold. Cross comes from the 1950s New York and is dressed as such. He sports a crimson shirt with a plain white tie and a rakish dark gray fedora hat. A master of the double-cross, Cross survived police crackdowns, mafia wars and magical assassins with self-assurance, cunning and gunmanship - not to mention a pair of demonic gauntlets, and the personal service of a demon bound to him by a magical double-headed coin. In Valhalla, he brings all of these to bear, fighting in tandem with the demons bound to him, and utilizing the power of his gauntlets and guns to devastating effect. 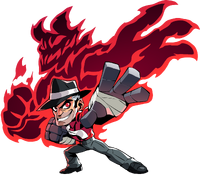 "In the 1951 case of New York v. Joseph Cross, charges against the gangster were dropped when eyewitnesses claimed the murder weapon was the man’s own shadow."

– Trials and Tribulations: Strangest Court Cases of the Twentieth Century

"Sure Pal. Flip the coin. Heads you win."

In Italy with the Allied army, PFC Joseph Cross found an ancient double-headed coin. That night, he dreamt of a demon and struck a deal. The demon would fight for him, and "after his last fight," the demon would get payment.

After the war, the New York underworld was rocked as terrifying new force moved in. Cross’s outfit took over and soon ran numbers, protection, and extortion in all five boroughs. At night, enemies would get a personal visit from Cross and what those who survived called living shadows. For years, Cross owned the town.

As he grew obsessed with wealth and power, Cross turned deeper to the occult. He waded through the blood of New York’s wizard population to accumulate magical artifacts and monstrous henchmen. But after Cross obtained the Shrouded Gauntlets of Belzar, things began to turn for the worse. Strangers appeared in town looking for him; hard looking figures with archaic cloaks and ancient weapons. Battling these cloaked vigilantes with his fists and guns was far harder than scaring New York hoodlums. But Cross, with his demonic henchmen, held his own.

Valhalla is the ultimate loophole in his deal with the demons, and the frightening but charismatic mobster holds his place in the Grand Tournament for love of battle and fear of the alternative. But now Cross and the demon have a new wager, and like-minded legends are placing bets of their own.