The Marshall of the Old West

Feared by outlaws and vampires from the age of fifteen, Cassidy is the toughest marshal to wear the badge either side of the Bifrost. - Mallhalla purchase description

Cassidy is a high dexterity Wild West-style Legend featuring the Hammer and Blasters as her weapons. She can be unlocked for 2300 Gold. Having been on both sides of the law, acting as a legendary Marshall and dangerous fugitive, Cassidy has a keen sense of justice and is unafraid to deal it out with the heavy end of her hammer.

When fifteen-year-old Cassidy Miller captured Wild Zeb and his gang, Zeb insisted his gun jammed and the sun was in his eyes. But, outlaws soon changed their tune, and just five years later, Bloody Cal Johnson bragged from prison that Utah had been forced to call in the great Marshal Cassidy just to bring him down.

In her long career, Cassidy's insistence on justice for all earned her many unlikely friends, including "the meanest horse in the West," a giant cougar named Boots. But it also put her on the wrong side of the law when she joined the Underground Railroad and became a wanted fugitive herself. Later, Cassidy returned to law enforcement in dramatic style when President Lincoln begged her to track down the Bloodfang Rangers, a company of Confederate Vampires.

To Cassidy, Valhalla is like any other frontier boomtown in need of her rough brand of Justice. She's always on the lookout for suspicious types and reckons that trouble's brewing.

"You just gonna stand behind me looking all-fired stupid or are you gonna draw?" - Marshall Cassidy

Wild West Marshal Cassidy Miller wears apparel very standard of her American style. Most importantly in her Wild West attire, Cassidy wears a very large, cream colored cowgirl's hat. Her hat is decorated with a pale blue ribbon that is wrapped above the wide brim of the hat. Her shining golden Marshall's badge also adorns her hat, showing both her status in the mortal world, and her keen sense of justice. Under her hat can be seen wavy shoulder length hair that frames her face, and is a reddish brown in color.

Also this shade of red-brown is her tan leather jacket, which is worn over a simple white cotton blouse. Her jacket is short in length, but has sleeves covering the length of her arms, which then lead to firm leather firms of a dustier, pale brown. There are also two golden buttons on her jacket, which match the gold of her Marshall's badge.

Also golden is her belt buckle, which sits next to a gun holster of similar color to the belt itself. Amusingly, the gun holster is many times smaller than both Cassidy's guns, and her hands. The belt itself hold up a pair of dusty blue jeans, which in turn lead to a pair of knee-high, thick leather boots, which are the same dusty brown color as her golves. On each boot is a single steel spur, which denotes her ranching background, and is customary with her Wild West Marshall appearance.

Cassidy's Hammer and Blasters also reflect her Western heritage. The Sixshooters are two large, iconic revolver handguns with the typical six bullet cylinder. The hammer and sight of each gun is clearly visible, spiking out from the otherwise smooth barrels. The handles of each gun are pale brown wood. Her Rail Hammer is similarly iconic and non-decorative: a simple wooden pole with a standard steel hammer head attached at one end. The hammer's head has one blunt face, plus a curved claw on the other side.

Cassidy is a close combat character. Her signature attack is the heavy attack + down button that makes a considerable amount of damage toward and behind her. You can use her to throw enemies away with her guns that have a good fire rate, or her rail hammer. This hammer also deals a lot of damage, quickly and have a quite good range. Make sure to balance her attacks with dexterity. 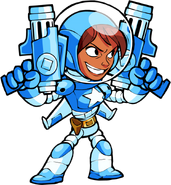 140
No space is safe for desperadoes on the run from Space Marshal Cassidy. 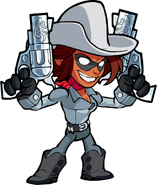 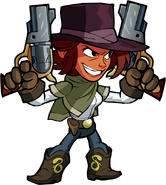 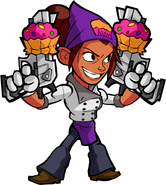 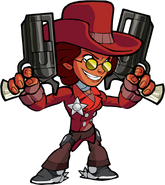 100
This town is a reasonable size for both of us, but I still don't want you in it. 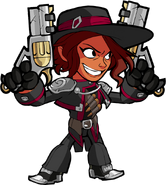 140
Riding into the sunset is the quickest way to find vampires. 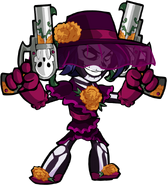 140
Dressed in her finest and ready for celebration. 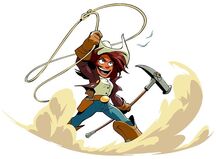 Official art by TheOddling
Add a photo to this gallery
Retrieved from "https://brawlhalla.fandom.com/wiki/Cassidy?oldid=3439"
Community content is available under CC-BY-SA unless otherwise noted.