Brynn is one of the available characters in the game Brawlhalla. This glorious angel-looking woman wields an Axe and a Spear, with the only stat of her kit that is not capped at 5 points being her Speed, which is as 7. All of her other stats have 5 points assigned to them. 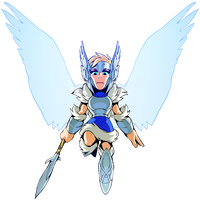 Chooser of the Slain, Slayer of the Chosen[edit | edit source]

"Child, you are my daughter and a Valkyrie - a goddess. Your father was a mortal, it is true, but he was a great warrior - perhaps the greatest. So do not complain to me that the Elves whisper behind your back. Ignore them - they know you outshine them all. Or put them to the sword."

– The Valkyrie Hypernia to a young Brynn

"Most Valkyries are too by-the-runes to see greatness where I find it. Do you remember their faces when I brought the minotaur to Valhalla?"

Children are rare among the immortals of Asgard, and every immortal with any heart came to love Hypernia's daughter, the heir to her immortal mother's impossible beauty and her human father's legendary charm. Brynn grew up in every corner of Asgard. She made it her school and her playground. Raised to be a Valkyrie, she nonetheless can shoe an eight legged horse, weave the threads of fate with the Norns, and curse a blue streak in Dwarvish.

As a Valkyrie, her sense for the mortal mind has helped her spot greatness in the most unlikely places, not just in princes on battlefields, holding their swords high. Three of her most shocking choices have won the Great Tournament. But Asgard is a vast society, and some don't see Brynn as a true Asgardian, while her success has bred jealousy as well as admiration.

Brynn was drawn to the tournament by a desire to study these mortals. Does she belong with them? She watched, learned their ways, and eventually came to love their bravura and their mettle. Now she competes for the pure joy of it, her human thirst for the fight surprising everyone, including herself.