The Brawlhalla logo, depicting bold orange and yellow text and a Mjölnir shape in the background.

Brawlhalla is a free-to-play fighting game created and developed by Blue Mammoth Games and published by Ubisoft for a multitude of devices. It released as part of Steam's Early Access on April 30, 2014. An open beta was released in November 2015 before the full release was launched worldwide on October 17, 2017.

Brawlhalla will always be 100% free to play, with no pay-to-win advantages and no in-game purchases to keep you from the action. 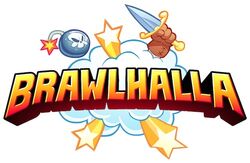 A 2D platform fighter where the best of the baddest-ass warriors in history battle each other in an eternal tourney of champions for bragging rights, infinite mead, and the pure pleasure of delivering a beatdown. Includes online 4 players free for all, team games, custom games, and local play options.

Upon its release in 2017, Brawlhala was available for Microsoft Windows, macOS, and PlayStation 4. On March 5, 2018, Ubisoft had acquired Brawlhalla. Because of this, Brawlhalla began the development of Rayman as a playable character. Rayman was released on October 17, 2017, along with a port of Brawlhalla for Xbox and Nintendo Switch.

On August 6, 2020, Brawlhalla released a mobile port of the game for iOS and Android.

Currently, there are 5 available game modes in this game: