Diesel Heart, Lord of the Waste

The only thing in the wastelands that burns hotter than his rage is his diesel-fueled heart! - Mallhalla purchase description

Barraza is a post-apocalyptic steelpunk legend of Brawlhalla featuring the Blasters and Axe as his weapons. He can be unlocked for 5400 gold. Barraza is both fighter and survivor, using a fighting style equal parts brutality, cunning and stubbornness - while not the fastest Legend, he leaves a trail of devastation to demonstrate the cost of underestimating him.

“Barraza is the answer. Find him. Search for him in the waste. If ever he loved me he will listen. Offer him our water. Offer him our fuel. Offer him everything if he will be our king.” -Chief of the Lastfolk

The Apocalypse came not on a missile but a mist. MBFC’s self-replicating nanobot cloud bricked anything that relied on computer circuitry, which in 2150 was everything. Deployed in desperation against a rogue agent’s hideout, the weaponized mist was supposed to become inert after twenty minutes.

Shot in the chest by The Gaslords and left for dead, he returned, kept alive by an artificial heart burning diesel and an iron will. Soon the Gaslords were dead, followed by the Ravagers, the Scorpions, the Battleborn, and every other challenger, until the man they called Diesel Heart ruled the wastes from Four Face Mountain to the Steel Wall. Waterhaulers, warbangers, zealots, radsuits, wastecroppers, junkers – all feared Diesel Heart.

Take his bike and water and leave him to the crows. I never even liked her. -Barraza

Barraza wears piecemeal armour hand-fashioned out of the scraps of an apocalyptic wasteland, with spiked shoulder pads and armor plates held in place with cloth wraps, and a large gas mask fitted with numerous tubes, which filters out the deadly mist of nanobots that created the devastated wasteland he came to dominate and rule over. He also sports black fingerless gloves, white warpaint on his chest and ringing his eyes, a shocking turquoise mohawk and a single animal-canine earring in one ear. He has a large vertical scar on the side of his head, above the ear. 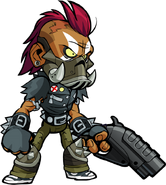 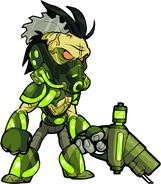 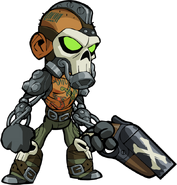 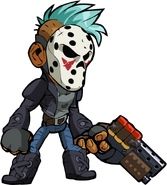 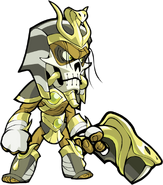 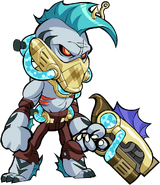 Wraith Barraza
Add a photo to this gallery

Retrieved from "https://brawlhalla.fandom.com/wiki/Barraza?oldid=2785"
Community content is available under CC-BY-SA unless otherwise noted.