Barraza is one of the available characters in the game Brawlhalla. The Lord wields Blasters and Axe, having 8 points of Armor as his best stat and 4 points at his worse stats, Dexterity and Speed. 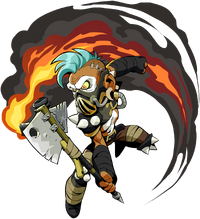 Diesel Heart, The Lord of the Waste[edit | edit source]

"Barraza is the answer. Find him. Search for him in the waste. If ever he loved me he will listen. Offer him our water. Offer him our fuel. Offer him everything if he will be our king."

"Take his bike and water and leave him to the crows. I never even liked her."

The Apocalypse came not on a missile but a mist. MBFC's self-replicating nanobot cloud bricked anything that relied on computer circuitry, which in 2150 was everything. Deployed in desperation against a rogue agent's hideout, the weaponized mist was supposed to become inert after twenty minutes.

Shot in the chest by The Gaslords and left for dead, he returned, kept alive by an artificial heart burning diesel and an iron will. Soon the Gaslords were dead, followed by the Ravagers, the Scorpions, the Battleborn, and every other challenger, until the man they called Diesel Heart ruled the wastes from Four Face Mountain to the Steel Wall. Waterhaulers, warbangers, zealots, radsuits, wastecroppers, junkers - all feared Diesel Heart.