Bödvar is one of the available characters in the game Brawlhalla. This viking wields Sword and Hammer, having Strength and Dexterity capped at 6 points in his stats and Armor and Speed at 5. He is well-known by many due to him being on posters and advertisements. 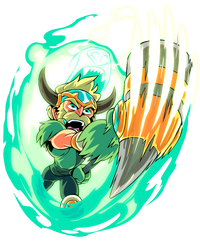 "I speak, you noble vikings, of a warrior who surpassed you all. I tell of a great bear-man who overcame giants and armies, and of how he came to leave our world and challenge the Gods."

"Listen you nine-mothered bridge troll, I'm coming in, and the first beer I'm drinking is the one in your fist."

– Bödvar to Heimdall, guardian of the gates of Asgard

Born of a viking mother and bear father, Bödvar grew up feared and mistrusted by his own people.