Azoth is one of the available characters in the game Brawlhalla. The dead king wields an Axe and a Bow, with his best stat being Strength, at 7 points, and the worst is his Speed, at 4. 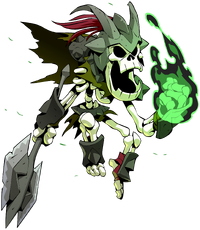 "Fa'zul and his Azothian Cultists have found the map and even now seek the seven soul stones. You, the greatest warriors in the land, must find the stones before Fa'zul. If you fail, Fa'zul will use the stones to summon the Lichlord Azoth from the realm of death and doom Elyria."

King Azoth the Great vowed his empire would endure for all eternity. Delving into dark and ancient magic, his court sorcerer crafted seven soul stones that, when brought together, could summon Azoth from the grip of death itself to fulfill his oath.

A thousand years after his death, devoted acolytes of his forgotten empire assembled the stones. Azoth awoke, as brilliant and ruthless in battle as ever, if a little dusty. So began the first reign of Lichlord Azoth. Only after a saga of epic heroism were the servants of light able to defeat Azoth and scatter the soul stones. The Valkyries, impressed by both Azoth’s battle prowess and his stick-to-itativeness, gave the lich a seat in Valhalla.

However, the vow was not forgotten. Azothian cultists gathered the soul stones again, and Azoth found himself back in Elyria. Once more, a desperate band of heroes barely defeated him. Lord Azoth the Mighty. Asothos the Terrible. Azothus Triumphant – again and again Azoth has been summoned from Valhalla to reprise his role as the scourge of the living.

Welcome to Azoth’s afterlife. He would be more than happy to stay retired in Asgard, enjoying some reading, an occasional battle, and the company of his cat Dander. By the Old Law, even the most heinous curse must contain the seed of its undoing: Azoth can break the burdensome cycle through ten thousand selfless acts. He reckons if pet care counts, he might be at one.