Attacks are one of the core components in Brawlhalla. Each player must attack in order to KO their opponents and ensure their victory.

Brawlhalla's damage system doesn't use health or hit points. Legends instead have a damage meter which shows how much total damage they have taken. As the damage taken by a Legend increases, the Legend is knocked further by each attack, making them easier to KO as the game goes on. Often, players on high damage (red to black; see below) are killed quickly by a single powerful attack. A player therefore has two challenges: firstly to put their opponent into high damage, and secondly to secure the critical KO afterwards.

The damage an attack deals is the same for every Legend, and is only modified by a Legends Stats - namely, a Legend's Strength and Defense stats. Two Legends with the same Strength will deal the same damage with the same attack to the same opponent. A Legend's Signatures are unique, and have individually assigned damage and force values - these attacks are not affected by stats. The damage made by a legend with the same attack stat as his opponent defense is the weapon's base damage value.

The amount of damage a Legend has received is indicated by:

The colors can be expressed as white, yellow, orange, red and black (shown below). However, each color has a range of shades on a gradient. For example, a pale orange color denotes less damage than a deep orange color, though each are of course orange.

Damage can also be expressed as a number. Colors give an effective system understood by all for expressing damage, which is incredibly useful during the heat of battle. However, numbers can go into much more detail. Only players who are very familiar with the game will be concerned with numerical values.

Damage is capped at 700 damage (according to the game’s Training Mode settings) though reaching close to 700 damage in a real game is unheard of. The majority of KOs happen at around 150-200 damage. Once a player's damage meter reaches red (between 150 to 700 damage), the knockback from each attack drastically increases. The table below breaks down this relationship.

For more in depth information on Weapons and Weapon throws, see Weapons

Weapons are the best means of dealing damage and knocking out your opponent. They will generally allow a Legend to extend their reach and increase their damage output during a fight, as well as allowing them to instantly change their fighting style mid-match. Weapons can be used to attack your opponent, and can also be thrown to attack your opponent at range.

Gadgets are various items that appear on a Brawlhalla stage during a brawl.

Most gadgets are throwable items that will deal damage to your opponent, though the Horn, in addition to being throwable, can be used to call your Sidekick across the stage to:

By pressing the grab button at the right moment, you can catch any Gadget thrown in the air. This technique is useful against opponents throwing bombs but also risky. To pratice this technique, a special bomb catching training room is available in Training Mode.

The primary aim of the game is to attack the opponent. All attacks deal both damage and knockback to varying degrees.

You can attack using:

Each Legend has two different weapons, as well as a universal set of unarmed attacks.

Following these three different criteria, every single weapon in the game has 11 different attacks available to it (there is no Aerial Side Heavy). They can be written in a range of ways, but are mostly described as below. (Sometimes N, S and D denote Neutral, Side and Down respectively). Attacks that don't said 'Air' or 'Aerial' are presumed grounded.

All grounded Heavy attacks are also Signature Attacks. This is because they are utterly unique to a specific Legend and Weapon. For example, the attack produced when Asuri, holding a Sword, does a Neutral Heavy is utterly unique to Asuri's Sword. The same is true for her Side and Down Heavies with the Sword. Hence, every weapon has three Signatures attached to it. By subtraction, every Legend has 6 Signatures attached to them, three for each of their weapons. To write this, one would say the Legend's name and weapon, such as: Asuri's Neutral Sword or Gnash's Down Hammer.

Due to the similarity between the use of the word Heavy and Signature, these terms can be interchangeable. There are two instances where one would call an attack a Heavy but not a Signature. Firstly, there is no Aerial Signature. Every Spear Legend, for example, performs exactly the same Spear Recovery and Spear Ground Pound. The words Recovery and Ground Pound remove any confusion. Secondly, unarmed Heavy attacks are not technically Signatures. Every Legend shares exactly the same set of unarmed attacks. The unarmed Heavy attacks are therefore not unique, and not 'Signatures'. However, all players would understand what an Unarmed Side Heavy was - the difference here is technical, and unimportant.

In addition to dealing damage to an opponent, successful attacks will also Stun an opponent for a short period of time. While an opponent is stunned, they cannot move or attack - all inputs will fail for the duration of the stun.

Different attacks stun opponents for different times - an attack that stuns an opponent for a long time may not do a lot of damage or knockback, and vice versa. Certain attacks that "grab" the opponent and move them around when they land will stun the opponent for the duration of the attack.

All attacks knock your opponent away - the value of 'how much knockback' an attack has is called Force.

There are 2 different types of Forces:

Startup time is how long it takes for an attack to start after pressing the attack button.

During startup time, the player can't do anything like the attack they just performed is queued up. A player could take advantage of this time to land their own attack.

Recovery time is how long it takes for an attack animation to end after the attack has been performed.

Much like startup time, the player can't do anything during recovery time, making it an opportune moment for other players to strike.

If a player runs off of a platform while charging an attack, they can continue to charge while moving downward. This is called a slide-charged attack.

Charging attacks should be used very carefully, as it gives an opportunity for your opponent to set up and counterattack you.

If a player performs a spot-dodge (dodge without moving) in mid-air, and attacks immediately afterwards, they will perform the grounded variant of an attack while in air. This is called a gravity cancel.

Gravity cancelling can be especially useful for heavy attacks, as recoveries and ground pounds are not always viable attack options.

Certain weapons and attacks have unique properties attached to them.

The following is a list of active input attacks in Brawlhalla. Note that the direction "other" means any direction other than the previously specified one. 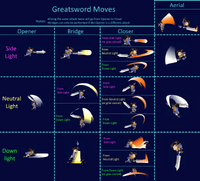 All possible non-sig moves on Greatsword

The Greatsword has a unique kit that includes three types of attacks: openers, bridges, and closers. These are light attacks used together to create unique strings only possible with the Greatsword.

Each of these attacks has unique distinctions:

Certain Signature attacks have an active hitbox while charging, meaning if an opponent touches the attack while the user is charging they will take damage. This is sometimes referred to as "chainsaw," due to Ulgrim's chainsaw being the first instance of this type of Signature attack.

A limited amount of Signature attacks allow the user to change their movement direction while charging the attack (or during the attack, depending on the Signature). This movement is a lot more limited than regular movement, with not much movement ramp-up if alternating steering directions.

Some Signature attacks will teleport the user directly to another location, marked by a visual indicator. Unlike regular moving Signatures, the opponent can not be hurt if they are between the user's initial location and the teleport destination.

Teleporting Signatures can be cut short if used into walls, allowing their hitbox to come out quicker.

Transforming Signatures are Signatures that change properties if charged for a longer time. Most of these Signatures simply reach further when charged, with an indicator to show when the Signature has transformed.

Most of these Signatures can be fully transformed during a charged Gravity Cancel, with the exception of Xull (who can charge halfway) and Petra (who can't at all).

A combo is when a player lands multiple attacks in rapid succession on an opponent without getting hit. Combos are a fast way to build up damage on the opponent.

Generally, combos use light attacks, as their fast startup and recovery times make it easy to chain multiple hits together.

True combos can be tested in Training mode with the "Show Stun" option enabled - if no dodge frames appear after the first attack, the combo is true.

A gimp is when a player is knocked out, typically at low damage, because their recovery was interrupted by an attack.

Attacking an opponent who is mid-recovery cancels their recovery. If they are low enough on the screen and have no jumps or dodges left, attacking them to block or interrupt their recovery can secure you a knockout.

An X-pivot is when your momentum is cancelled out by movement from an attack going in the other direction.

To perform an X-pivot, dash or chase dodge and immediately after change directions and attack. If your attack has some forward momentum, your momentum will quickly be shifted to the opposite direction, making it a good surprise attack.

A slide-charged attack is when a heavy attack is performed off-stage by using the momentum from a dash to slide off of a platform.

Unlike a gravity cancel, a slide-charged attack can be charged for the complete duration of the heavy attack. Additionally, the user will fall for as long as they are not atop a platform. Gravity will not affect the user when the attack is active, however.