Cataclysm from beyond the stars. - Mallhalla purchase description

Artemis is a legend of Brawlhalla featuring the Scythe and Rocket Lance as her weapons. She was introduced to the game on June 14, 2017. Artemis has obtained great power purportedly from the 'will of the universe' itself. While her overriding mission is to destroy Orion, Artemis fights in the tournament with the full strength of the stars and galaxies themselves, unleashing the power of the universe on unsuspecting opponents in the eternal tournament.

“They grow up so fast.” – The Universe, probably.

Philosophers sometimes talk about “The will of the universe”, a consciousness above that of even the gods. We may never know if the universe has a will, but we do know it has an immune response. When foreign matter streaked over the skies of Valhalla, the response was an antibody of celestial proportions. As the name Orion was spoken, Artemis came into being, although she would not call herself that for many years.

Born Mary Washington in West Plaza New York, she was a voracious reader with a love for strawberry ice cream. While Mary had a relatively normal childhood, her parents sometimes wondered why she would read stories of the goddess Artemis killing the hunter Orion over and over again.

Mary was too eager to confront her opponent. At the first sign of her powers manifesting, she opened a wormhole intending to stride into Valhalla. Instead, she emerged in the vacuum of space. Struggling for survival, she fought to maintain a cocoon of atmosphere cycling in from nearby worlds. In desperation she ripped the core from a nearby star to forge her armor, extinguishing her first solar system. From there she traversed the dangers of the universe, careening through the Tri-Nova, ending Starchampion's fleet, and imploding the Leviathan of Eons, to name a few. Once ready, the completed Artemis arrived in Asgard.

In Valhalla, Artemis is still subject to the rules of local gods and must complete her destiny through the bouts of The Tournament. Sensing a common frustration, Nix has taken her under her wing and the two often spar to hone their scythe skills. As Orion’s reputation grows in the arena, Artemis wonders if all of Asgard might be too infected to save.

“I don’t only want to destroy Orion. But yeah that’s the main thing.” – Artemis 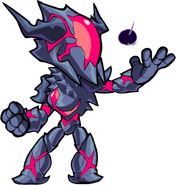 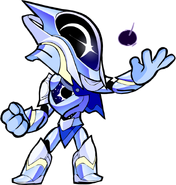 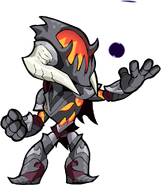 140
Ruling with an iron fist and a heart on fire! 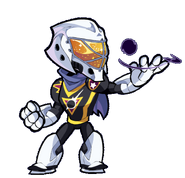 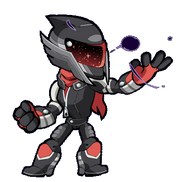 140
The ghost of knockouts yet to come.
Brawlhollidays Event Exclusive

Official art by TheOddling
Add a photo to this gallery
Retrieved from "https://brawlhalla.fandom.com/wiki/Artemis?oldid=3501"
Community content is available under CC-BY-SA unless otherwise noted.