Ada is one of the available characters in the game Brawlhalla. Her weapons are Blasters and Spear, and her strongest stat is Dexterity (at 7 points), with her lowest being Defense. (at 3 points) 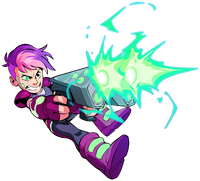 The Ghost in the Machine[edit | edit source]

"Target Ada is confirmed. Suspect is armed and located at the rear of the sixth floor...and on the roof...and twice on the third floor. All units, surveillance protocols are compromised. Ignore radio communications. Set Aim Augmentation to Manual. Disregard...[garbled]...on sight...[garbled]...incoming...[garbled]...down...[elevator music]"

"Combat Cryptography is easy. Once you can ignore the bullets and the screaming, it's just basic quantum calculus."

– Ada, shouted to a recruit during a raid on GovernCorp

In the undersea free state of Miami Dome, Ada founded the Right Wrong Cavaliers, an elite team of combat hackers and post-punk revival band, and she led their masterful guerilla campaign against Meyers and their shadowy GovernCorp backers.

She's pretty sure Valhalla is all some sort of computer sim, but until she can find a way out, she's playing to win.

Ada jumps up and shoots four green blasts from her guns which explode on contact on the ground.

Ada brings her guns forward and shoots a short, green laser from her guns. The laser hits several before launching the opponent.

Ada shoots out two smaller green blasts and then a very large green blast. The shots combo into each other. Ada receives recoil backwards.

Ada jumps up and swings her spear around.

Ada does a quick slash with her spear.

Ada does a breakdance and moves a bit forward.